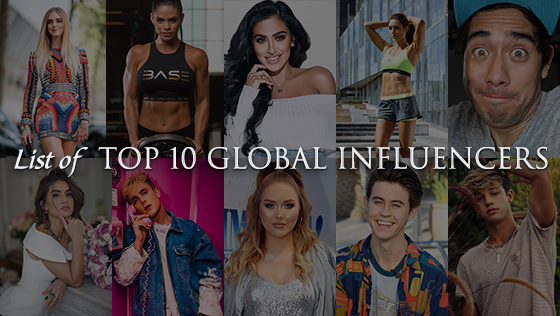 Ever since Instagram came into existence in 2010, it has become a social media staple that has given rise to a pocket of influencers. Each influencer serves as an inspiration in his/her own niche and has access to a huge audience and can persuade others to act based on their recommendations. This proves to be an effective tactic for brands and businesses to grow.

Certain brands have garnered a high following on Instagram – National Geographic and Nike – based on their own reach. But most brands do not have such capabilities and require a larger audience for their voice to be heard. This is where influencers help a lot.

There are top influencers in every niche based on their quality of content and how well-engaged they are with their audience. There’s a perception that most brands go for influencers with high number of followers, but it all boils down to the relevance, quality and your influence with the audience.

Here’s a list of the top 10 influencers who are influential in their niches:

1. Huda Kattan Huda Kattan is one of the most influential people in the makeup and beauty sector and boasts a large following on Instagram. She also has her own blog.

2. Cameron Dallas While he is popular on Instagram, he shines through mainly on platforms such as Vine and YouTube. His Insta profile gives a sneak peek into his life with friends and family. He also has his own show – Chasing Cameron – on Netflix.

3. Zach King Another Internet celebrity everyone loves is Zach King. This filmmaker is active on Vine and YouTube and undoubtedly has a large following on Instagram, where he often posts video content.

4. Michelle Lewin A model from Venezuela, Michelle is today a popular face of the fitness world. Her followers rise by a staggering number every single day, since her content – workout videos and fitness tips – has found favour among people on the web.

5. Nash Grier Like many other influencers, Nash’s claim to fame are his videos on Vine that he began creating when he was only 15-years old in 2013. Today, he has his own mobile games, social media apps and a personal website, where fans can buy his merchandise. Nash also makes live tours today and entertains his audience.

6. Chiara Ferragni Italy-born Chiara Ferragni is a popular blogger and fashion designer based out of New York, who’s the first-ever blogger to be featured on the cover of Vogue magazine. She has worked as a model for Guess and runs a fashion blog called ‘The Blonde Salad’. Chiara has also successfully collaborated with top fashion brands such as Steven Madden, Christian Dior, Chanel and Tommy Hilfiger, among others.

7. Nikkie De Jager This Dutch vlogger from North Carolina creates videos on makeup and lifestyle. She posts pictures of different makeup combinations and other tips on her Instagram feed.

8. Jake Paul Jake Paul was popular on Vine before he starred in a Disney sitcom, Bizaardvark. He is a hit among fans for his comedy videos and often posts snippets of his life on Instagram. He has recently launched TeamDom, which is an influencer marketing and creative agency and focuses on teen entertainment.

9.  Kayla Itsines Kayla Itsines is a renowned personal trainer and entrepreneur, who has been named among the most influential people on the Internet by Time Magazine. Her fitness programs are a roaring success and she often posts about other women to make her content more authentic.

Stay in touch with Whitevox